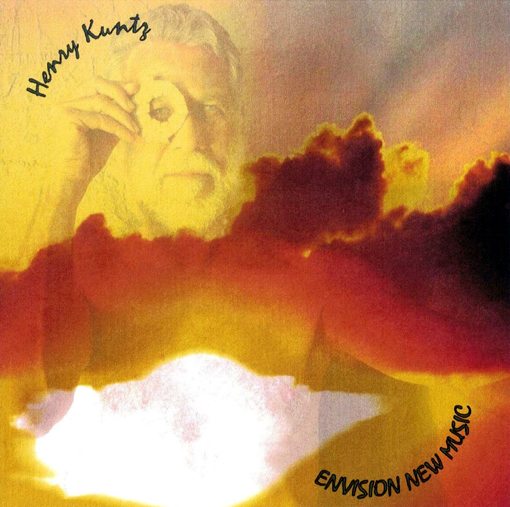 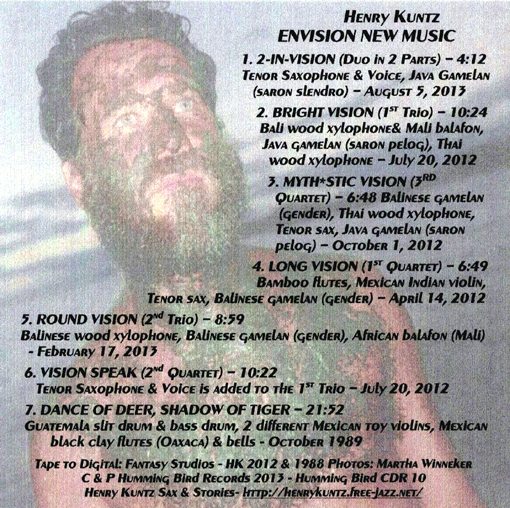 Envision: to imagine something not yet in existence

From the beginning, in creating the multi-track pieces, I’ve brought into play a concept I refer to as “festival form”, an idea that has been an essential part of the overall creative approach to what I call Total Music.

“In Total Music, a player’s total musical intelligence may come into play at all times… (In each part of the music), a player’s awareness is that of a total field of activity rather than of specific notes or thrusts. In each part of the music, something like a total musical process is occurring, unique to itself, perhaps able to exist by itself, compatible with but not dependent upon or leading the other parts. The whole, in this way, takes on a considerably greater complexity, having mainly to do with the types of instruments combined, the ‘natural’ differences in ways of playing those instruments, and the actual conceptual approaches employed… I’ve likewise combined instruments with regard to sonority but without regard to pitch, so as to allow a new range of pitches and ‘harmonies’ to result.”
– Notes to Total Music, 1991 (Humming Bird Tapes 009-010)

As a concept, Total Music has served me well. This is music based in real-time free improvisation that occurs within an open-ended “ritual” form – which means that the pieces are mainly meant to be experienced as ongoing processes rather than “heard” as net results.

But it is time to go a step further with experiential form.

Festival Form is itself an experiential form that can fully accommodate all of the elements of “total music”.

It is the umbrella form of any number of festival occasions around the world during which different musical and sound events are occurring simultaneously in the same physical space at the same time. Each “separate” event, however, is fundamentally important to the creation of the whole.

How would this concept work in an actual group improvisational situation, of which the multi-track creations are a type of avant-sonic sketch?

Each player would simultaneously create an organic complete music. Each player would relate or not relate to the other music and sounds going on around them, similar to when one is playing at home and sounds are occurring in the environment which may or may not influence one’s music.

While the players would not necessarily relate to each other in a compositional sense, they would relate to each other and to their shared environment experientially and together create (or “compose,” if you will) a sympathetically-in-tune experiential musical space – a space defined by the composite layers of sound that make it up, similar to the way the simultaneous layers of sound at a festival define and create the festival.

In early 2012, I had the idea of putting together an ensemble of this sort – multi-directional, multi-dimensional, and pan-cultural – which I would call the Envision Ensemble. However, the practical difficulties of organizing such a group and of bringing together players to play the types of instruments I wanted to include moved me in the direction of creating the new pieces which appear on this release. My hope is that they might serve as conceptual prototypes for the music of such an ensemble.

Does this new music sound so different from the multi-track music I’ve been creating all along? I’m not sure, but I believe that new thinking and clarity of thinking about the way one is working can itself give impetus to new form and can begin to expand the music in multiple new directions.

To provide a longer view of what I’ve been up to, I’m including with this release an early multi-track recording of mine from 1989 when I was only beginning to create in this way. Dance of Deer, Shadow of Tiger has a festival form feel to it and reminds me of being in “the village” at festival time. Duration itself (the piece’s 20-plus minute length) was intentionally employed as a means of moving the music out of summation-al/compositional time and into present/experiential time. This is a piece that was meant for release a long time ago but was forgotten about as newer music was created.

With all of these pieces, my intention is to construct a conceptual platform from which to Envision New Music.