Double Bassist Ben Lindgren began his career in the late 1960s in a blues band, then in 1972 he began studies with renowned jazz bassist and composer Gary Peacock.

He played in jazz ensembles which featured both scored and improvised music, and he believed in developing new musical forms which push the boundaries of self-expression.

He performed and made two European tours with the Glenn Spearman Double Trio, a group he co-founded, and with whom he recorded two CDs for the prestigious Black Saint label.. He played with innovative saxophonist Charles Gayle and toured with saxophonist John Tchicai in a trio which included drummer/percussionist Spirit. He played with Prince Lasha and Eddie Gale.

With OPEYE, with whom he played and recorded beginning in 1995, he included piano and National steel guitar in his repertoire in addition to doublebass.

Ben Lindgren was a painter of note whose large oil canvases have appeared in galleries around the San Francisco Bay Area, including a one-man show in North Beach that was hailed by Beat Poet Gregory Corso. His work, which combines his “love of nature with the freedom of abstract expression”, has also been featured on the covers of several compact discs and regularly helped set the stage for OPEYE performances. His clients included friend and renowned bassist Charlie Haden.

I recently visited an interesting art gallery in Oakland. It’s called The Black Box (subtitled “a sacred technology project”) and is located at 1928 Telegraph Avenue, not too far from downtown. The director, Aaron Lane, is interested in the intersection of painting and sculpture with other arts, and his openings have featured music and poetry.

My visit was prompted by a Tribute to Benjamin Lindgren (1947-2002): an exhibition of six Abstract Expressionist paintings by Lindgren and a film, See What You See—Ben Lindgren’s Paintings, based on the six paintings. The film was made by filmmaker/musician David Michalak. (A few of Michalak’s other films were also shown, as was the great experimental film, The Fall of the House of Usher, made in 1928 by James Sibley Watson and Melville Webber: that film is often referred to as “the first American experimental film.”)

I knew Ben primarily as a musician: he was a fine free jazz bassist and played other instruments as well. I had often seen his paintings on display in his studio, a pleasant, airy, light-filled place featuring a couch, Ben’s easel and some interesting books, mostly but not exclusively about art. The paintings were at once easy, familiar objects and visionary tokens of another world: once you looked at them, you were projected into an odd, mythical space, very different from the studio itself. At the time I visited Ben, Abstract Expressionism (or “AbEx”) as a “movement” was long gone, but that fact didn’t concern him in the least: it probably amused him to think that he was practicing—carefully and with great precision—an art most people thought of as “passé.” Ben had considerable wit and could be very funny, but he also had a kind of crusty, unmoveable “integrity”: a deep sense of what he was about as a person and an artist. It’s that integrity that shines forth from these paintings.

On his website, David Michalak tells how he happened to make the film about Ben. He had run into Ben’s son, Esten, who told Michalak that Ben had only six months to live. Michalak began to visit the artist and became enchanted by the paintings:

His spirits were high and I found myself getting very close to him in his final days. We played music and talked about our first meeting and all the movies we worked on together. He showed me his abstract paintings. I’d known him for years but had never seen them. Why? I thought people should be aware of this body of work; over 100 paintings! I got so inspired that I offered to make a film. Ben was thrilled by the idea. The filming process began with me dragging all kinds of equipment through his house.

Michalak comments, “Ben was so amazing in his acceptance of his fate”—which indeed he was. He was at times in considerable discomfort, but he spoke quite frankly about his situation. At some level, “dying” was simply a subject of interest to him, and he thought about it as he thought about everything else. One had the sense that he felt the strangeness of death as he felt the strangeness of living: Wow!

Michalak tells us that he wanted to call his film Ben Lindgren’s Paintings, “so people would be forced to say his name when referring to the film”:

Then I remembered what Ben had said when I asked him what liberties I could take filming his work. “See What You See,” was his answer. So I married the 2 titles for maximum effect: See What You See—Ben Lindgren’s Paintings.

The six paintings, which range from 1987 to 1999, are as haunting, elegant, and rich as anything Ben Lindgren ever did. I was caught initially by the earliest, “Axagoras Form.” Anaxagoras was a Greek philosopher born about 500 BCE who believed that all matter was infinitely divisible and motionless until animated by mind. I wondered whether Ben’s title was a reference to him—and perhaps a pun on the musician’s term for an instrument, “axe.” Certainly the painting is both philosophical and, like everything Ben did, musical. What was striking was the way in which forms flowed into one another—merged and separated—and how much sheer movement the painting contained. We were kept constantly alert, interested. No individual “form” announced itself as a “subject”—there was no “my daughter’s dog Fido” here. It was the painting as a whole which engaged us and moved us through its swirling, infinitely contrapuntal forms. Not for nothing has work by Lindgren graced the covers of CDs by free jazz artists such Glenn Spearman and Anthony Braxton.

The other five paintings—one untitled, “Cosmic Implosion” (a particularly apt title!), “Glacier Pitch,” “Exotic Jumble of Architecture,” and “Primordial Now”—were equally powerful. As the title suggests, “Primordial Now” emanated a shimmering sense of peace and harmony. There was a deeply religious, even mystical aspect to Ben Lindgren’s consciousness—he was, technically, Russian Orthodox, but he was also very aware of his Alaska Native roots—and that comes through in much of this work, which deliberately moves away from this world into something “other”: an “implosion,” a “jumble.” Lindgren was part of a generation which experimented with hallucinatory drugs such as LSD, and that too plays a part here.

David Michalak’s film sees all this and plays with the paintings by focusing on various parts of them, seeing them in differing modes of light. Since Michalak is a musician as well as a filmmaker, I wondered whether he considered the six paintings as six “chords”—a given which could be used as a spur to improvisation. Film has been called the most “realistic” of media, but like Lindgren, Michalak deliberately moves us away from all that. One of the other films he showed was called Not Quite Right. Music for the films—always interesting, always apt—was provided by REEL CHANGE, a quartet featuring Andrew Voigt, David Slusser, Adam Hurst, and Michalak himself.

Ben Lindgren was a wonderfully elegant man for whom art penetrated every fibre of his being. (Anyone who ever received a letter from him remembers the beauty of his handwriting.) His considerable capacities as a musician—I’m not in his league, but I played with him a few times—are material for a separate essay. His paintings give out the deep glow of his consciousness—which is in fact their subject. The question he asked in painting after painting is What does my consciousness feel like? How can I paint what is simultaneously real and immaterial? His answers are rich and layered, elegant, and passionately imagined. Ben’s close friend, the great saxophonist Glenn Spearman, died a few years ago. On the night before his death, Glenn’s wife Shantee asked him, “Are you dying?” Glenn answered, “No.” That same answer might have been given by Benjamin Lindgren. These paintings—and David Michalak’s film—are part of the proof.

[My friend Mary Marcia Casoly is off on a kayaking trip. I wrote this poem to her—and then the phone rang and the poem took on another meaning.]

and then
in the morning

out on the water
again 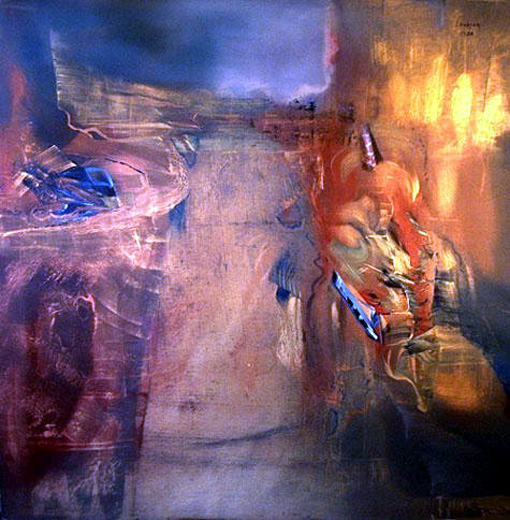 The moment I finished writing this, the phone rang and I learned that my friend Ben Lindgren had died during the afternoon. I suddenly realized that the words I had just written might have a very different meaning:

and then
in the morning

out on the water
again 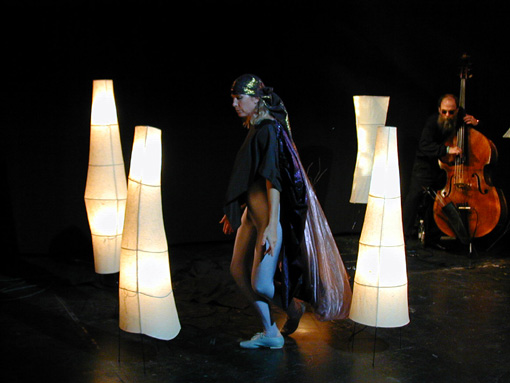 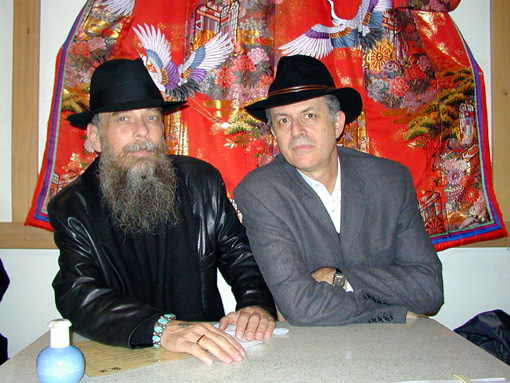 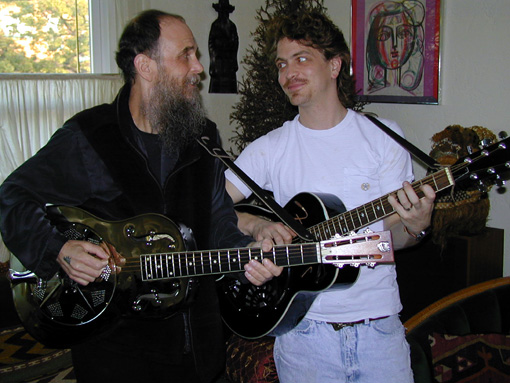 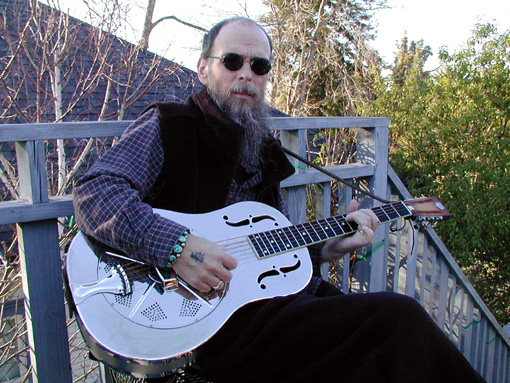