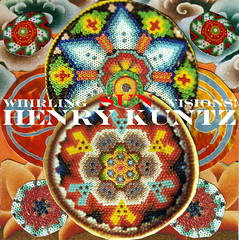 Music by saxophone player Henry Kuntz has been reviewed before and no doubt on one of the occasions I wrote about the fact that the saxophone is not really my favorite instrument. I do make exceptions for those players who use the instrument in a different way, like John Butcher for instance, and perhaps also for someone like Kuntz. Even when he plays his instrument in a different way than Butcher, more traditionally, there is more to his music than just the saxophone. On ‘Whirling Sun Visions’ he offers nine works for multi-track recording, playing along with his self, but also incorporates lots of ethnical percussion, like gamelan, ‘Mexican hollowed-out log violin’, ‘Mali balafon’ and his own voice. Kuntz keeps his music ‘limited’. Dense in nature, but with few variations on the various sounds he produces. His music is minimal, but not through the use of loops. Real-time repetition of sounds, layered on top of eachother, with small variations in playing. Free play at work here of microtonal stuff, which works quite well. Neither free jazz or saxophones could interest me very much, but in Kuntz’ hands this sounds pretty well. (FdW)

Subtitled “Multi-Track Works-In-Process Miniatures”, this is a collection of pieces for overlaid saxophones, vocals and exotic percussives, although the latter are not present in all the tracks. Kuntz appears very interested in the generation of ritualistic moods through the concurrence of different pulses, the presence of the Javanese gamelan adding evident metallic/melodic tints in episodes like the opening “Celestial Forest”. But if we pretend to be transported in a parallel dimension, this recipe leads to the magnification of an innocent-sounding density, a child playing with a series of reed instruments in a room full of clocks. The segments where only amassed saxes are featured are more comparable to the gathering of seagulls fighting for food on a beach, kind of a semi-chaotic superimposition of pattern-within-pattern designs which translates into a peculiar type of entrancement, a bunch of Poppy Nogoods who have had a few too many. (Massimo Ricci, Touching Extremes)

Listen to Henry Kuntz | Gods Within