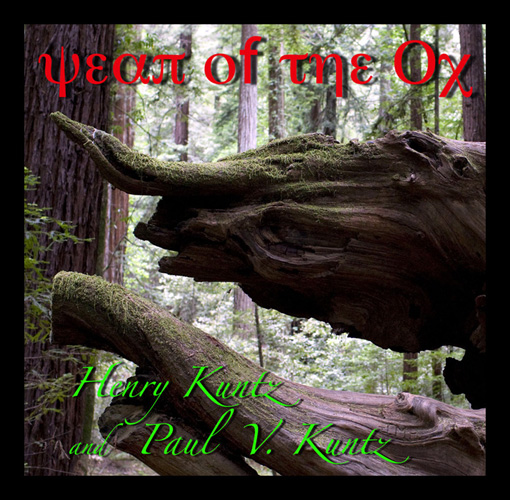 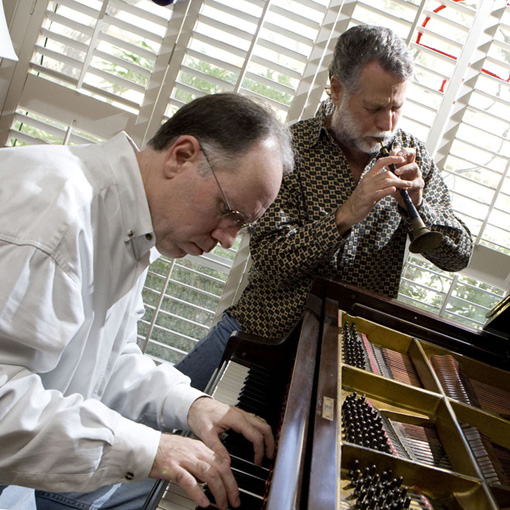 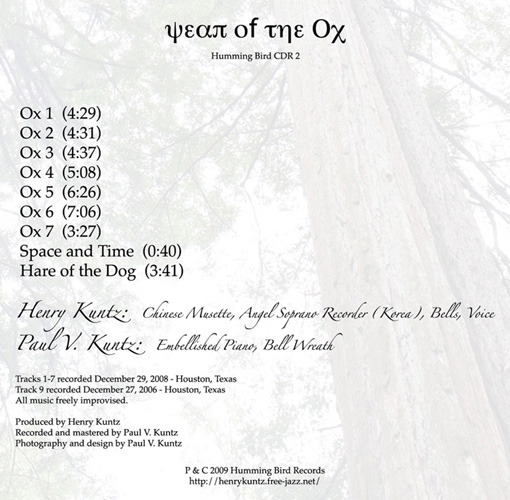 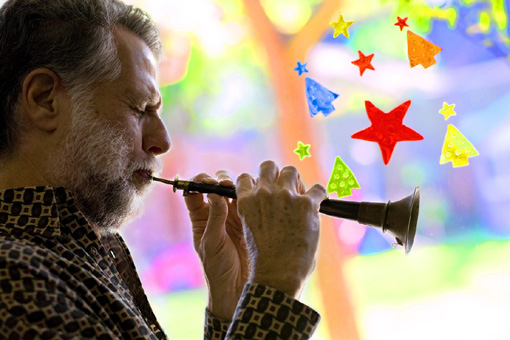 “These are the first recordings Paul and I have made together in 25 years. We had fun improvising and spontaneously shaping the music; each piece grew out of its own organic logic.” —Henry Kuntz

Paul V. Kuntz (b. 1961) began playing piano as a teenager. His fascination with jazz and free improvisation led him on an intense journey of musical discovery and self study. He delights in having a blank canvas and being able to create on the spot. Among his piano influences are Dave Brubeck, Alice Coltrane, McCoy Tyner, Keith Jarrett and Cecil Taylor.

Paul V. Kuntz is a professional photographer whose work has been exhibited in fine art galleries internationally. His photographs are in the collection of the Museum of Fine Arts (Houston, Texas), Museet for Fotokunst (Odense, Denmark), and in various private collections including that of the late Helmut Gernsheim (Lugano, Switzerland). Most recently, his work appeared in a retrospective book of Mr. Gernsheim’s photography collection, Helmut Gernsheim: Pioneer of Photo History. 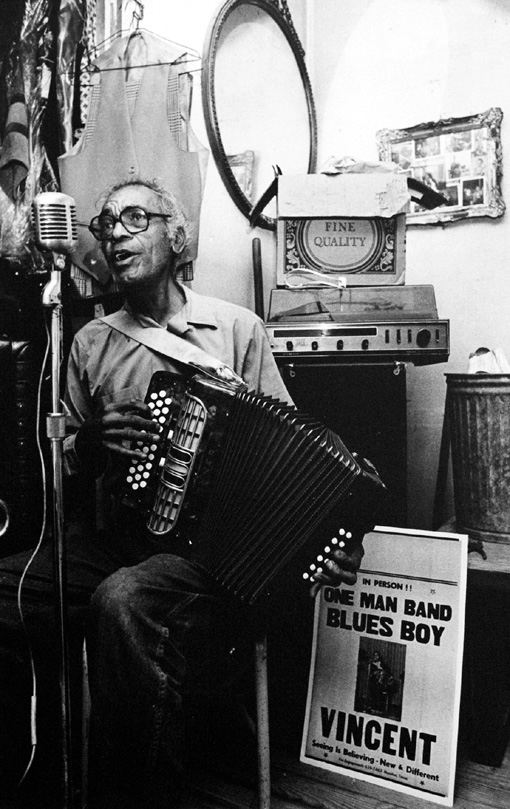 Paul is a professional photographer, but plays piano since his youth with a love for jazz and improvisation. With Henry Kuntz we are in the company of a veteran improvisor. We first hear him on a very early record of Henry Kaiser, “Ice Death” (1977). And two years later Kuntz started Hummingbird and released his first solo-album “Cross-Eyed Priest”. Releases over the years were not many. Concerning this new release Kuntz says: “These are the first recordings Paul and I have made together in 25 years. We had fun improvising and spontaneously shaping the music, each piece grew out of its own organic logic.” The reason for this long gap remains is not given. Also whether we are are talking here of two brothers, father and son, or another (family-)relation is not made explicit, but of course of secondary importance. But let’s come to this meeting. Henry Kuntz plays chinese musette, angel soprano recorder, bells ,voice. Paul Kuntz embellished piano, bell wreath. We find them in nine concentrated improvisations, each one starting from a different angle. The music comes to you very direct. It is of great purity and rawness, unpolished. This makes that the music has an immediate emotional impact, although it are very abstract improvisations. Like in ‘Ox 1’ Kuntz produces often very penetrating sounds from his instruments, whereas Paul attracts attention with his self-made prepared piano turning it into an almost percussive instrument. In ‘Ox 2’ Henry excels in (fake) japanese vocals. Virtuosity is not their thing. The music lacks ego and pretensions. It springs from a meeting between two very personal and dedicated players. Authentic music! (DM)

The simpler instrumentation (Chinese musette, Korean soprano recorder, bells and voice against “embellished” piano and bell wreath) makes for a straightforward path to the immediate understanding of the music, which grabs the attention via the obvious contrast between the respective approaches. We’re told that Paul Kuntz’s pianism has been partially influenced by people such as Cecil Taylor and Alice Coltrane besides “regulars” as Dave Brubeck and McCoy Tyner, but you won’t find no eruptions or cascades here. The structure of the large part of the pieces sees the piano underlining – typically quite calmly and evocatively – single strained notes and cried-out overtones halfway through forest calls and liberation of inner tensions. If, at times, this might generate the impression of a chance meeting with an overall sense of unglued parts and bizarre intrusions, one also clearly detects the feel of non-constriction by stylistic necessities, and appreciates the honesty that appears to drive the brotherly quest for unusual communication. — Massimo Ricci, Touching Extremes