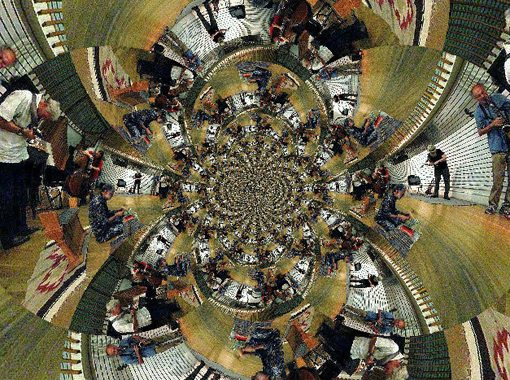 The Envision Ensemble moves toward an advanced improvisational archetype, one in which multiple independent events may occur while the musicians simultaneously create an experiential musical whole. Beyond expanding the independence of musical line – thus increasing the complexity of musical form – the Envision Ensemble expands the formal independence of each player – so that multiple musical forms might be happening at once, moving the music in the direction of what I call “festival form.” So the players will be creating the total musical space rather than any specific improvised composition.

Each player will simultaneously create an organic complete music. Each player may relate or not relate to the music and sounds going on around them, the same as when one is playing at home and sounds are occurring in the environment which may or may not affect one’s music. While the players will not necessarily relate to each other in a compositional sense, they will relate to each other and to their shared environment experientially and together create (or “compose,” if you will) a sympathetically-in-tune experiential musical space – a space defined by the composite layers of sound that make it up, similar to the way the simultaneous layers of sound at a festival define and create the festival.

The performance will be completely improvised. At my suggestion, the Ensemble has not rehearsed prior to playing. The reason for this is that experience suggests that players’ edge of creativity often comes out more in the initial meeting (i.e. in the rehearsal) than in the performance. So, along with the musicians, you will be experiencing this music for the very first time.