JOURNEY TO ITALAQUE Part I.

An Andean Adventure in Four Parts
By Henry Kuntz
Part One: Finding the Way

In South America, where seasons run counter to those in the north, it was the fall of 1986. As I crossed the Peruvian border into Bolivia — in the midst of a five-week trip — little did I know that I was about to embark on one of the most exhilarating yet harrowing journeys of my life. 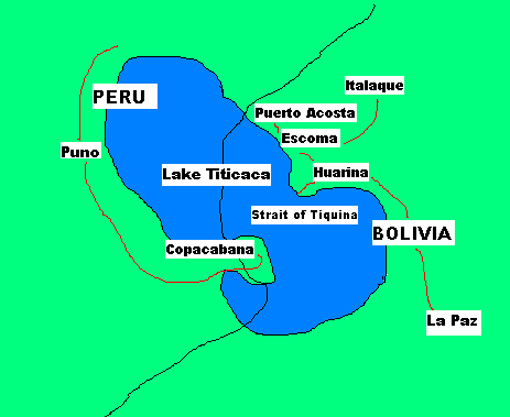 A principal goal of mine in coming to Bolivia – whose population is 60 to 70 per cent Indian — was to attend an intriguing Andean festival in the village of Italaque. I had read, in Lynn Meisch’s Guide to El Dorado and the Inca Empire, of an event on May 3rd of each year, the feast of the Discovery of the Holy Cross. This was to feature a contest among groups of sikuri or panpipe players from surrounding areas who had undergone musical training there. Italaque holds near-legendary status in the region for the high level of its players’ musicianship.

The only problem was that I had been unable to locate the village on any country map I had seen. So upon arrival in La Paz — the world’s highest capital city, sprawling compactly around a bowl-shaped stone canyon at 12,000 feet — I immediately went to the tourist office, a tiny kiosk on the esplanade of a wide boulevard, for the purpose of obtaining directions. 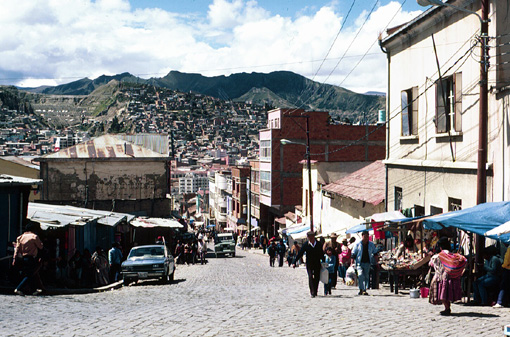 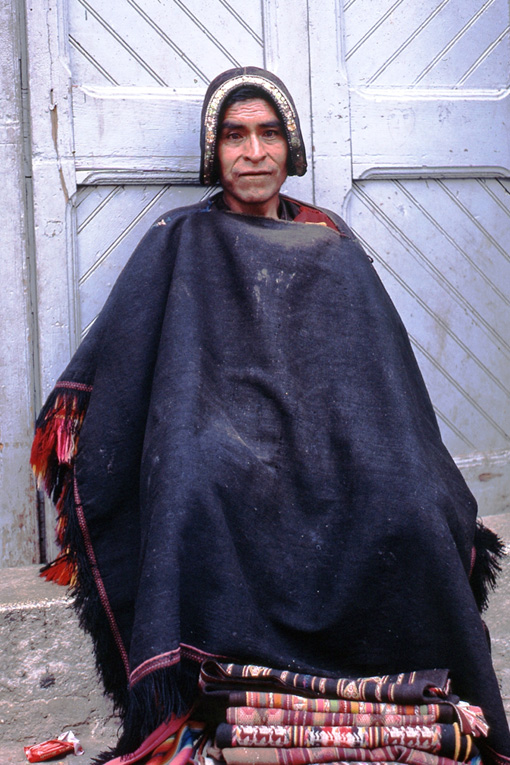 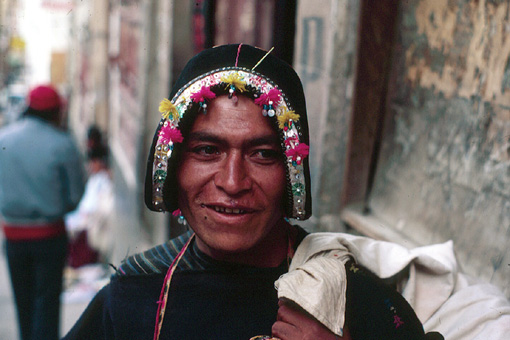 There I met Australian Patrick Hanson and American (and Australian resident) Josh Ahrens who, excited upon learning of the Italaque festival, were intent to join me on the journey.

They were thirtyish in age, flaunting a spirited youthful enthusiasm. I was two months shy of turning forty.

We found the village on a detailed map, high up the far slope of Lake Titicaca. (Lake Titicaca – at 12,500 feet – is the world’s highest navigable lake and the second largest in South America, covering 3,200 square miles.) This side of the lake, the northeastern one, is little traveled by foreigners. The border which runs between Peru and Bolivia there, and which continues diagonally through the lake, affords no legal entry or exit points from either side of the frontier.

So the first response to our inquiry from the woman behind the counter was an attempt to discourage us. “No es una area turistica,” she warned, in a forbidding and foreboding tone we, in our naiveté, cavalierly shrugged off. She said that the only way for us to make the journey was to hire a driver whose services would run U.S. $300. Since each of us was living on between $10 and $15 a day for all expenses, that sum was out of the question. Even dividing the cost three ways, that would minimally come to a week’s budget for each person. *

There had to be another way, we thought. After all, locals were somehow doing the trip. So we asked around and discovered the cobbled back street where transport to that part of the country departed. And it was there we presented ourselves in the cold, clammy darkness of the early morning of May 1st.

What type of transport we expected to get, I can’t recall, but what we boarded – with a packed crowd – was a large, open flatbed truck, a raised beam running the length of its center and its sides flanked by wooden fencing. (In the Andes, one discovers that while buses, and to a certain extent trains, ply the major routes, other travel needs are met by trucks such as this, commandeered by private drivers, who may or may not combine their runs with other business.)

Truck etiquette seemed to be to place one’s belongings beneath oneself to sit on. That presented a certain logistical problem for me (packing camera, cassette recorder, and a three-foot long wood bass flute and several LPs I had purchased), but most people had with them only large mushy bundles of things tied together by blankets, and the floor of the flatbed was stacked and carpeted with these.

The prime seats were behind the truck’s cabin, held on to dearly by several oversized Indian women who leaned comfortably back, uniformly attired in their wide indigo skirts and colorful rainbow wraps, their heads sporting the always-fashionable dark bowler hats.

People began securing their places in the truck around 6:00 AM. It wasn’t until after daybreak, 8:00 AM, that we finally began our snail-like ascent from the city’s cavernous gorge. Hovering above the metropolis in the distance stood its majestic “guardian,” snow-packed Mount Illimani, gazing caringly down from 20,000 feet.

We passed over the canyon ridge and onto the altiplano, the vast high tableland stretching from northern Chile to central Peru between the two main eastern and western Andean cordilleras or ranges. Traces of the eastern cordillera could be seen in the distance; the plateau itself was wide and endless.

Everyone was well bundled because, although it was a spectacularly bright and sunny day — the Andean sun is in fact, due to the thinness of the high altitude atmosphere, the hottest direct sun I’ve ever experienced — the air was cold, heightened by a chilling wind from the moving vehicle. The Indian women further anesthetized themselves to the temperature by steadily chomping on clumps of dry coca leaves.

I should say a few words about the altitude, because for most of a month, I lived at or above 12,000 feet. Being at that altitude is not simply being at an elevation but being in an elevated state. Following a headachy day or two of personal acclimatization, there comes an amazing sharpness of perception – and atmospherically, everything is sharper — and a clarity of mind unlike what one normally experiences at lower levels. It is not unlike being stoned.

As the truck clattered past the canyon’s rim, we were struck by the appearance of clusters of dusty, unkempt red clay barrios. Only the poorest lived in this windswept area, descending daily to work in the less harsh climate of La Paz. Gradually, nature reclaimed the space until we were riding not far from Lake Titicaca itself, its glassy waters gleaming sky blue in the morning light. 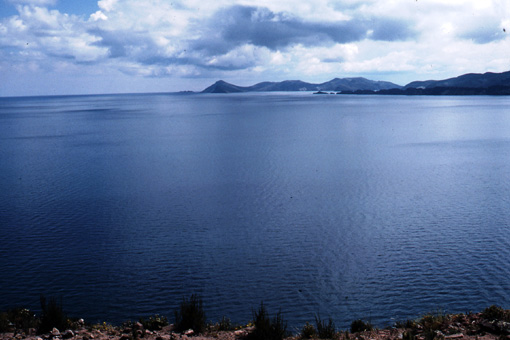 By early afternoon we arrived in the town of Escoma, two-thirds the way up the Bolivian portion of the lakeside. A road runs from there to Italaque, so we had thought to depart the truck at that juncture and secure other transport. But we were told nothing was moving in that direction anytime soon and that it would be better for us to continue on to Puerto Acosta, the last town of note before the Peruvian border; from there, we could get to Italaque.

Escoma was well into one of its own yearly festivals. No one was going anywhere. Our driver took off: for a meal or to join in the celebration, we didn’t know. Meanwhile, we waited uncertainly on the truck. 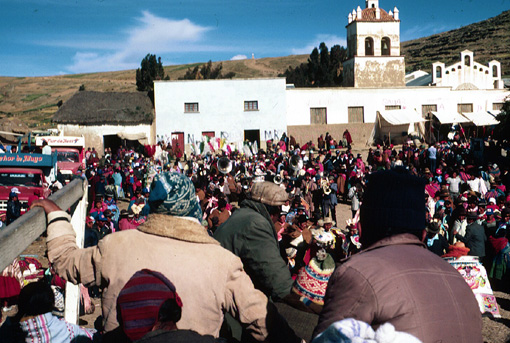 From around a corner of the square we could hear strains of clashing brass bands. Trumpets, French horns, tubas, big bass drums – band after band came parading in front of us, playing their own version of the same melancholy tune. Women in brown alpaca ponchos, scarlet velvet skirts, and black bowler hats, threw their heads back high, bobbed low, twisted this way and that, proudly displaying their steps. Snaking among the women and the bands were fantastic characters in cartoon armor, floppy cardboard capes with layer-cake shoulders, silly white, brown or orange wigs on their heads. A mocking affront to the conquistadores? 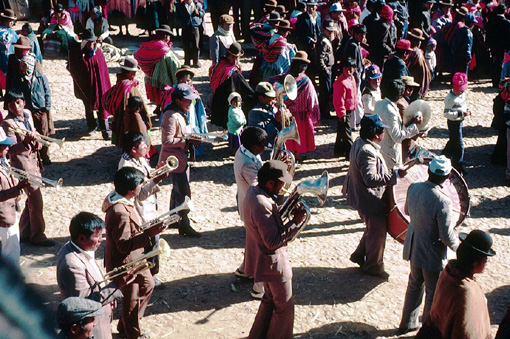 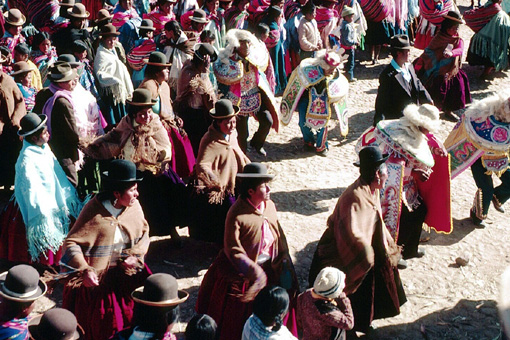 An hour and a half later, we began rumbling down the road toward Puerto Acosta.

Now, there is a superstition among the Indians of the region that whenever Easter Sunday comes too early, before the end of March, as had occurred this year, it is a fateful harbinger of natural calamity and disaster. True to form, rain after rain had deluged the area in previous weeks, raising the level of gigantic Lake Titicaca nearly ten feet. Entire villages had been inundated with water, farmlands had turned to mush, the train on the Peruvian side of the lake between Juliaca and Puno had discontinued service because most of its tracks were submerged and, of course, portions of road were completely flooded.

The impact on our journey was such that there were parts of the highway that were so under water that the weight of the passengers in the truck would cause the vehicle to bog down. We had to abandon the truck and scurry, sometimes as much as three quarters of a mile over steep inclines, to catch up to it, waiting with its engine revving. No one wanted to be left behind. Even with that precaution, water would rise to near the top of the truck’s four foot high wheels, so close to its underside that it looked as if it might float away. Somehow, it always managed, struggling sluggishly through the lake’s new periphery. We continued on.

At 7:00 that evening, we loped into Puerto Acosta. The place was utterly dark save for a lone dim streetlamp near the bus stop, the town’s only electrical extravagance. A small boy led Patrick, Josh, and me through the black streets to an unmarked pension whereupon a gaunt, jowl-faced Spaniard, flashlight in hand, greeted us at the door. He led us to a rectangular stone room, spartan but not unpleasant, where there was a bed for each of us. The room came to 2 million pesos apiece, extra for however many thin candles we burned. The bathroom was outside and around the corner: a sink, no shower, only cold water.

No matter, we were happy to be there. The Spaniard brought us a large beer to cool our thirst, and we queried him about getting to Italaque. To be sure, we could reach the pueblo from Puerto Acosta, he said. But there was no road and no transport, only a path. We could walk it easily, he claimed. The path, he said, was muy directo. And the village was only 25 kilometers away!

Thanks to Martha Winneker for editorial assistance.
Text and photos Copyright Henry Kuntz. All Rights Reserved.

While we were on a strict traveler’s allowance, we became instant millionaires upon entering the country. The Bolivian peso was trading at nearly two million (!) to one US dollar. The currency was so devalued that a single sheet of toilet paper was worth more than a one peso bill. Luckily for us, there were now one million peso notes. There were reports of restaurant patrons having to produce foot high stacks of bills to pay for a meal.